So near the end of the year, we look at the fact why we did not have blogs last year.

Now with this blog we inform you about all the things that have passed this year.

Eye care In January, we did a  more or less unscheduled eye camp  in a small and poor village Dibiyya, nearby Kambia. We have been asked by the foundation Dibbya (http://www.dibiyya.nl/) to do an eye camp. A supposed new threat of Ebola almost caused that we should not do it, but with some modifications it could still continue. We planned to investigate up to 40 people. However, there were more and more people and ultimately Wim (eye doctor), together with the local team, saw 120 patients. For 43 patients there was the diagnose of cataract and they have been in surgery in the weeks after this, at the Baptist Eye Hospital in Lunsar. 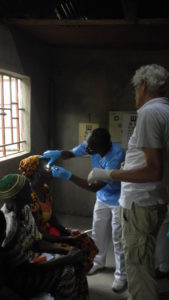 The huge influx of patients 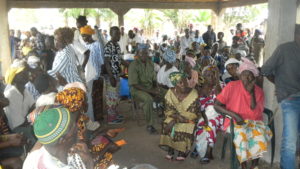 Also 28 blind people are diagnosed, to have a training for walking independently with a stick. 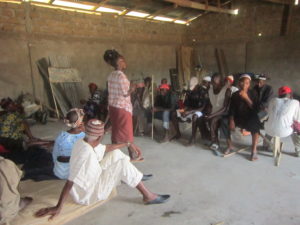 For an impression of such a blind training, we have posted a video via the link below, made by EBM Germany. Idrissa Tarawallie, the blind trainer, gives explanation about the impact of the training in the lives of the blind people.

Meanwhile Dibiyya made a new request for another eye camp, because in the vicinity of the village are still many people with eye problems.

Wim and Berend organized also  two other  eye camps,  in Sumbuya and Waterloo. They selected again many people for cataract surgery or for a blind training.

Knowledge transfer at an eye camp 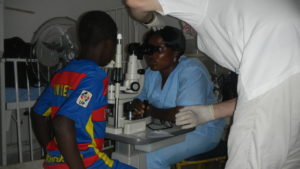 As every year FAD have financed cataract surgery for 325 patients in 2016 for poor people.

For the coming year we are trying to focus on refreshment courses for the staff of the outreach teams of the eye hospitals, to make them better equipped for their work in the outreach eye camps.

Besides this all technician Ben Teule visits Sierra Leone for FAD. He’s going to train local technicians to refurbish and maintain all broken eye equipment in the hospital, so the equipment can be used much longer. Summarized: there is a lot of work in eye care for FAD.

The two medical posts in Sumbuya and Songo keep the attention of FAD. Both hospitals are supported with a supply of medicines. The proceeds of these drugs they can be used to purchase new drugs and for minor maintenance of the medical posts.

In Sumbuya  baby clothing, towels and bed linen are brought. Women who give birth in the medical post receive a small package of this. In this way they motivate women to give birth at the health post, rather than in the bush or at home, with all its consequences.

Agriculture
For the organic bananas that started last year, it’s a difficult time. There have been many setbacks. The organization that would help them withdrew. The yield also appears much less than planned. The farmers  must now go much more than expected on its own strength and knowledge.
FAD is investigating if we can start a large-scale project in agriculture. Discussions about this item will be in the coming months.

Fishery
After Ebola was finished, the fishermen could finally go for fishing. Although after a few months it turned out that the boat had become so bad that it had to be replaced. It was too dangerous at sea. The fishermen have built a new boat, with largely private funds and only a little help from FAD.  Now they have started again with fish and the first results are very encouraging. 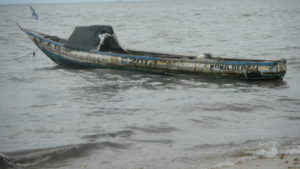 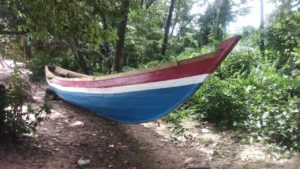 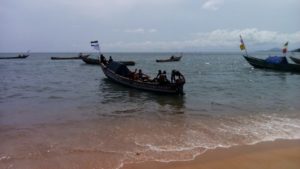 What a huge one 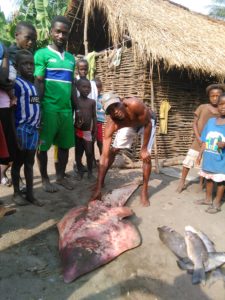 Last year we started with microcredits, and this year it has expanded. At this moment 220 people benefit of a microcredit of the FAD. Among all these people there are always some who have difficulties, but overall it is quite successfully how people act with this. We see that people proudly tell about the business they do with the money.

In addition to these microloans we have given a loan to  four young men who are trained as a welder. They shall jointly set up a company. They use the loan to purchase equipment. They are very motivated to make it a success. 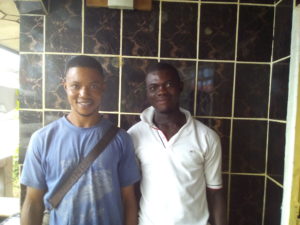 Two of the four welders

Last year we have funded seven persons personally. Of that seven,  two have successfully completed the training, one of them a nurse training and one a human resources training. The other five are still working.

Beside this there are still two orphans who are sponsored for the primary school and six pupils in a nursing school, sponsored by the FAD with tuition.

Five of the six nurses 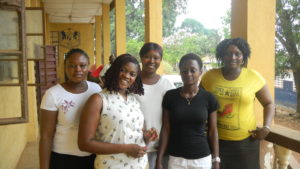 This year we have again received several gifts, including a number of them  monthly for sponsoring individual programs. Great !! Also there is gathered a lot of clothing and sportswear. Last week we took the clothes into a container to be shipped to Sierra Leone. Again, this could go with a load of the Samaritan Foundation, http://www.desamaritaan.org/.

On behalf of FAD Sierra Leone and FAD Netherlands

A Merry Christmas and a beautiful, healthy and happy 2017 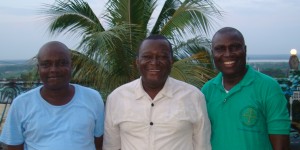